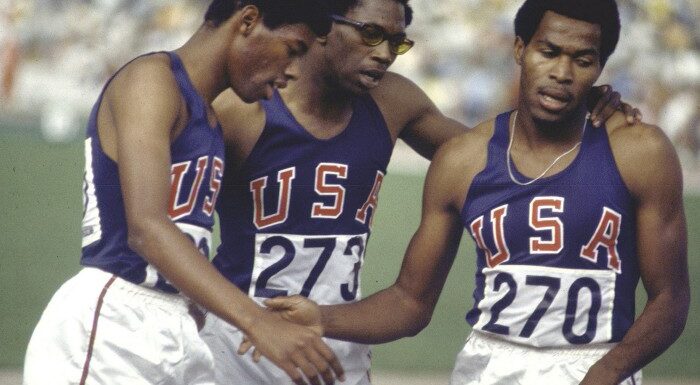 In the decades after American sprinter Lee Evans won the 400 metres Olympic gold in 1968, he built a career coaching athletes in Madagascar, Saudi Arabia, Nigeria and more than a dozen other countries. But on the occasions he returned to visit family in the US, he would greet his younger sister Rosemary at the airport with a groan.

“He would say: ‘Ugh, I don’t like coming here. I can feel the oppression,’” says Rosemary Edwards. “The US was not too kind to him.”

Evans, who died on May 19 aged 74 after suffering a stroke in Nigeria, is best known for his performance at the Mexico City Olympics, where he set a world record of 43.86 seconds that would stand for 20 years.

But his legacy at those games and beyond is also of fighting for racial equality, after his own podium protest in 1968 drew ire on all sides, leaving Evans “disillusioned and upset”, according to his sister.

Evans won his 400m race two days after teammates Tommie Smith and John Carlos raised their fists on the victory podium for the 200m, in a salute to the Black Power movement that became one of the most iconic images of the 20th century.

Like Smith and Carlos, Evans was a member of the “Speed City” San José State University athletic team and a leading member of the Olympic Project for Human Rights, the organisation which highlighted the poverty and inequality experienced by black people.

Evans faced opposition from both sides for his own podium protest, in which he donned a black beret to stand atop the platform but removed it for the playing of the US national anthem. As recounted in the 2018 documentary 1968, Evans’ actions made “white people upset about the beret, while many black people were upset that he took it off”.

In the film, Evans said that he was criticised for not doing enough in the name of protest to be kicked out of Mexico City, as Carlos and Smith were before him. In response, Evans said he told them: “If you wanted to get kicked off the team, [then] you should’ve made the team and did [sic] it yourself.”

Born on February 25 1947 in Madera, California, Lee Evans was the fourth of seven children of a construction worker father and a housekeeper mother. According to Rosemary, the entire family would work in the fields of nearby farms and, because he was taller, Lee would often operate irrigation systems, watering bean plants in the fields outside Fresno.

Rosemary remembers him as “a true Pisces and a middle child”, who was an animated storyteller but also introspective. He liked to recount how, as a boy, he realised he held promise as a runner when he pulled ahead of his older brother Douglas as they outran a neighbour in the fields chasing them with a shotgun.

Evans would go on to win five national titles in the 400m, breaking the world record twice. He also anchored the gold medal-winning, world record-setting US 400m relay team at the Mexico City Olympics.

But his success did not bring financial rewards, and improving the impoverishment facing black athletes was central to the OPHR cause. “We were hungry all the time because there was no money,” Evans told the 1968 filmmakers. “My scholarship was $85 a month, and my rent was $80, so I had $5 left over.”

When his competitive running days ended, Evans began teaching and coaching overseas. He directed the national athletics programmes of Nigeria and Saudi Arabia, and trained athletes from 18 other countries. He was inducted into the USA Track & Field Hall of Fame in 1983, and is survived by four siblings, his fourth wife, Princess, and six children. He was predeceased by a son, Aleator Evans.

Over the past year, a number of high-profile athletes have protested against racial inequality in the wake of the murder of George Floyd. And more than 50 years after Evans and his teammates protested on the podium, the International Olympic Committee is still trying to separate the games from social causes; last month it recommended a series of rule changes to “preserve the podium, [field of play] and official ceremonies from any kind of protests and demonstrations”.

In a tribute to Evans for San José State University, Harry Edwards, founder of the OPHR, wrote: “In no small measure, today’s athletes can stand taller, see farther and more clearly, and reach higher in pursuit of achievement and change in both sport and society because they stand on the shoulders of GIANTS such as Lee Evans.”